Always A Photographer, Never A Bridesmaid

Life is a highway,

An exciting thing is happening - the leaves are turning, the air is getting a bit chilly, and the trees are beginning to turn colour. It's the most wonderful time of the year, my favourite season, fall.

Of course, the very most exciting thing to happen this week was when I finally got the message that I’ve been chosen as a bridesmaid instead of a photographer for a friend’s wedding! Technically of course, that’s bridesmatron. I don’t talk about it much, but after shooting a lot of friends weddings (another one this weekend! So excited) every so often it sometimes feels as though I was a second line friend for some of my closest friends. While I know that’s not true, and it’s just an ugly feeling that destroys my joy in being present for the people I care about, and bridesmaid choices are not necessarily representative of friendships over time (though I am pleased to say that mine have definitely stood the test of time so far) I can’t help but sometimes feel like I’m always a photographer and never the bridesmaid. Finally next year at the ripe old age of 31 I’ll be up there as a lovely, happy bridesmatron. Yay for being a part of weddings in any case! I am excited to attend one as a guest next Fall around this time as well. It’s glorious to enjoy weddings in general, but being a part of them in any way is lovely and truly enjoyable for me.

I’m a little sad because there’s a baby shower coming up in a few weeks for a cousin’s new baby that I can’t go to because I have a prior commitment for a big corporate gig. It’s not the worst problem to have, but I am a little wistful. At any rate, I am sending Paul on his own for that.

I ain’t afraid of no ghosts

On Monday Paul and I went to see the new Ghostbusters movie at the IMAX theatre at the West Edmonton Mall in 3D, which after a coupon from our previous purchase wasn’t terribly expensive. We were excited to find that the WEM is a good place for Pokemon as advertised and we caught a couple of good ones. The movie was fun and a pretty good homage - nothing super special, but not a crappy movie either.

I completely forgot about a coaching appointment that evening so I felt like dirt for a while but I eventually forgave myself.

I have a beautiful wonderful tree fort, my summer project two years running. Tuesday afternoon I spent some time installing the double foam floor in my treehouse using those colourful foam puzzle blocks. Spent a little time in there the next day and it was definitely a bit more comfy when crawling around. I got a secondhand set from my friend, which is great because they’ll basically always be covered and I just want them for the foam. Just a few more enhancements every year, but I made a lot of progress this summer. The treehouse now has flooring, blankets, and sleeping bags throughout, one giant pillow, one harder armrest cylinder pillow, and a nice fluffy canvas pillow, all in various shades of blue, green, and sunwashed. There are three pretty lanterns hanging that are more for beauty than light. I don’t usually light them now, but if there happened to be a garden party I would, along with the freshly installed soft white LEDs that give just enough light to read or chat in there in the dark. Next summer I believe I’ll be looking at some mosquito netting and rain protection, possibly some nice drapery, running a power source to the far side of the fort for devices so I can spend more time in there without running all my battery packs down, and a dedicated fort blanket. I have a temporary warm fort blanket for this fall, but I would like a more comfy soft one for next year.

In the misty morning fog with

And you, my brown-eyed girl

The other day my friend messaged me and asked if I was interested in a free perm from Eveline Charles Esthetics Institute, a student there was in need of a hair model. I knew that perms were a multi-hour investment, and perms by an inexperienced person doubly so, but I also knew that I was planning to get a perm anyway over the next few months, and I have a wedding to shoot this weekend in Saskatoon where my family is. So all in all, not bad timing for a fresh new do. Plus as I said to Paul, I’ve never been bald or buzzcut before, so there’s always that to fall back on if anything went terribly wrong. On a serious note though, I knew there were going to be instructors there checking on the perm often, so I wasn’t that worried.

Being blissfully unaware of the kind of names that different genders have in other countries, and with a poor connection when he called me, I didn’t realize until he walked up to me at the salon that Khalid was a solidly built dude, a pleasant looking solid-sized black man who I found out was from the Sudan, though I could have guessed the region of the world from his skin tone. There are many countries in the world so I don't tend to feel bad about it anymore if I don't know much about one. In this case I did recall that it bordered Egypt, which I was proud of. The main thing I knew about the area is that the people there have the most beautiful shade of dark ebony skin, like his.

So, on a total tangent from my perm experience, here’s some thoughts.

I know I married a textbook white dude, but though I didn’t ever end up dating anyone of a different ethnic background, I am unlike some people in that I don’t always prefer men of my own race, physically speaking. Had I fallen in love with someone else, I absolutely could have ended up in an interracial marriage, particularly seeing as I was looking for a person who shared at least my core religious beliefs and the overwhelming majority of the Canadians who share my European ethnicity are now agnostics or atheists. I guess all that to say that I wasn’t just looking at white dudes, even though some girls do - and that’s okay if that’s just your sexual preference in terms of how you like people to look, in my opinion, it’s when it’s truly more driven by avoidance and racial or cultural bias that it makes me feel sad.

I like the diversity in Canada. I love seeing interracial couples and families, in fact they fill me with joy. I think quite honestly I would find European countries a little odd, with their stark homogeneity. (Cue me being proud of knowing how to spell that word on the first try!)

The thing about photography is that in some respects whenever you're out shooting you look at people's faces all day. Understanding how a skin tone affects the camera for instance is actually important observation, not to mention that I am an artist and noticing the details of how things look is kind of our thing. So while I find the diverse colors of humanity absolutely stunning, I don’t talk about it much. There's all sorts of ever-changing rules and I must follow as a person of a presumably privileged skin tone about how I talk about other cultures. Though honestly, my ancestors were likely subsistence-farming peasants on one side and possibly as good as house servants in Britain somewhere on the other so the privilege almost certainly did not extend to the presumed colour of their blood, and some black people I have met are descended from royalty in their bloodlines, so appearances may not tell you much about relative caste.

Okay, so tangent aside, I got a really cute wavy perm, and it took the better part of all day. Luckily I had planned for this with drinks, snacks, battery packs for my phone, and happened to have a pokestop that was lured three times while I was waiting. So I have a full digital bag of pokemon goodies and I’m looking forward to playing more this month and going out with Paul.

Also, I have a gorgeous wavy perm. I haven’t been this happy with my hair in probably 2 years. 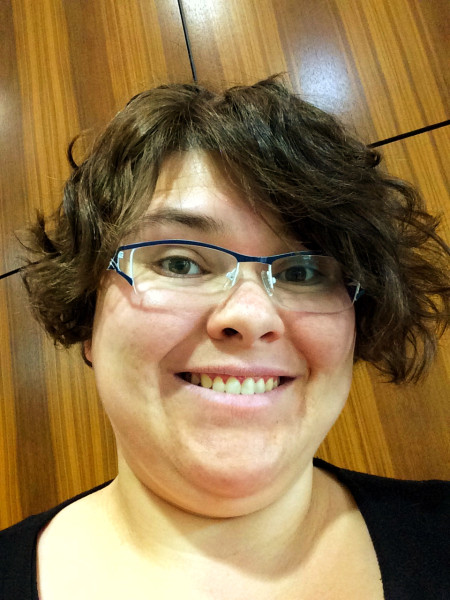 I also found a few great deals, enough that I’m planning to take Paul to the mall tonight and try a couple of nifty shirts on him and maybe see if any of them fit nicely, and to buy a few more things from the sale shelves.